I has been there in the corner of my mind for a week or so -- the image of a twisting Hill Country road, lit by dim headlights, as we drive back to Austin late at night.  I kept pushing it away but today it finally broke through and became a full-fledged memory.  Jim and I were coming home from visiting Aunt Melba, and my cousin Lorien was asleep in the backseat.  It was before he had mono, before he lost his job, before he became suicidal.  It was when things were good, and we were keeping ourselves awake by singing along to our entire Dr. Demento collection.  He was happy that night, and not just his usual "holding it together for another day," but really happy.  I could sense it then and I remember it now, how he was genuinely glad to be alive in that moment.  And I was glad to be there with him, to be a part of bringing him that moment. A rare and precious moment of joy.

Monday morning, in the wee hours, my husband took his own life inside his car, parked across the entrance to the driveway of the house we shared before our separation.

I remember the first hour in minute detail. After that hour, my memory went back to it's usual spotty and out of order recollections, but the first hour . . . 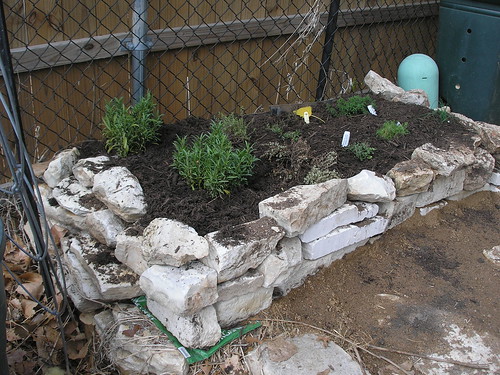 See the pretty herb bed the Snuffleupadon built for me? He planted it too.

See more about his gardening at Samuraigardener.livejournal.com

Is it just me or is the Snuffleupadon sometimes a bit of a Spaz?  Those of you who know him, is he as difficult to keep up with as I think, or am I just obtuse?  Take today, for example, we were driving home from work talking about, you know -- work, when we had this conversation (The parts in parenthesis are my inner thoughts):

Him:   . . . And then I had another customer who chatted with me about our favorite football teams while I reinstalled her software.

Me:  We are?  (Did we become Catholic while I wasn't looking)

Him:  Yes, because Maggie Q is in it.

Me:  [confused face] (thinking: he has a customer named Maggie who is a Priest and we are going to visit her?)  What?

Him:  She's half-Vietnamese and was raised in Hawaii and she's in it.

Me:  Oh!  She's not A priest, but she's in the the movie, Priest.  Does she have a speaking role or is she an extra?

Him: She has a fairly major part.

Me: If she has such a major part why is she calling our technical support line to have you reinstall shipping software? She works on the shipping dock for fun?

Me:  Yes, we were talking about customers you talked to today and I was listening and then sudenly there's a chick named Maggie Q.  How was I supposed to know she's not just some other person who called in?

Him:  No, NO.  She's that actress from Priest. We saw the trailers?  Remember?

Me:  (Yes, but the Trailers we watched did not have INTRODUCING MAGGIE Q WHO IS NOT A FEDEX CUSTOMER splashed all over the screen, strangely enough)  Sorry. I forgot.


Sometimes I want to grab him by the shoulders and shake him while I yell:  Who What When Where and How and IN ORDER! 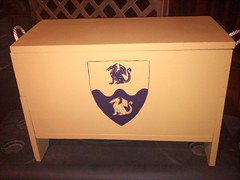 
My SCA household has a gift exchange every year where we draw names. This year I drew Katrina, and this years theme was 'make the campsites look more period'. I knew that what I wanted for my own campsite was rugs, tapestries, lanterns, and a few chests. It turned out that Katrina camps in a mundane tent, so I couldn't do tapestries for her. Rugs seemed to pricey. Finally I became obsessed with the idea of making her a chest. I found plans online for a six board chest she can use as a seat and as a place to hide her mundane gear. I decided to paint her device on the front. Nevermind I didn't own a single piece of woodworking equipment . . . .( Collapse )

I never realized, all those years that I skated by NOT registering a device in the SCA, just how much frustration I was saving myself.  I just thought I was avoiding the issue because I could not make up my mind what I wanted my device to look like.
( Collapse )

We have a roommate, the Houseboy, and he likes to cook!

We have been able to get slightly more involved in the SCA.  We're still what my Dona classifies as "inactive members" but the small number of of events we've been able to attend has done wonders for morale. We feel like part of a community of friends, even if we only see them once a month, for a couple of hours . . .

As long as I keep my desk tidy and refrain from stabbing coworkers with my embroidery scissors, no one at work cares if I sew or knit or embroider all day long.  Naturally, I can't drag in the whole sewing machine.  But, provided I can find time at home to iron the fabric, cut out the pattern, and zig-zag the edges, I can do most of the assembly by hand. I get a lot of "costuming" done that way.

The Snuffleupadon and I are getting along well with each other and are very happy with our relationship. I don't talk about our relationship much in public because I get all embarrassed, but suffice to say, we are happy together and I think we'll make it.

As grateful as the Snuffleupadon and I are to have jobs, as much as we appreciate the company's willingness to hire us in the first place, we are swiftly losing our sense of job-satisfaction.  The schedule we are stuck with makes normal life impossible.  We are constantly out-of-phase with anyone we might want to visit or even call on the phone.  We are unable to take trips because we never have two days off in a row.  We've been agitating for better schedules since early September.  They tell us that schedules can be swapped around whenever a the department adds new people, but there have been three groups of newbies roll in since we first brought up the subject of a schedule change, and . . . nothing.

Also, recently some of the upper management wandered off to find better paying jobs and the people who have taken their places are people who value ass-kissing more than competence. We have started losing the superiors we relied on to make our own jobs easier (Read-- upper management kicked them out).  This, combined with the bad schedule, is making us think more and more about just looking for work elsewhere.

All that stuff that needed repair, replacing, or maintenance back in 2008 when there was no money for it, well. . . it has exploded now.  We basically spent all of that extra dollar-an-hour on things-that-should-have-been-replaced-two-years-ago.  Things like Tires, the clutch on my car, an axle on my car, etc. Still waiting in line: prescription eyeglasses (three years old now and causing headaches), the kitchen stove (randomly doesn't work), and a leaky roof in the utility room.  Also, the dryer is not heating up like it should, but still dries clothes if you use a higher setting, and the washing machine also has to be coaxed into working, but I expect those to hang on another year.

Also, after 32 years of allergies to pollen, dust, and cats, I am now also allergic to MOLD!  Note that I live in a city that once got 60 inches of rain in one year.  yay.

The Snuffleupadon is allergic to flea bites.  I sneeze whenever I touch something that has been dusted with Diatomaceous Earth.

Guess how we found out?

But just out of curiosity, I checked my symptoms against one of those charts which help define the difference between a cold and the flu. Inevitably, it doesn't matter which chart I look at, they all want to know if my symptoms were sudden or gradual.  This is where I always pause and debate . . . usually for so long that I have recovered from whatever-it-was before I make up my mind.

It's all in how you define "sudden".

Certainly, when I went to bed last night I did not know I was sick.  When I woke up this morning, I still did not know it -- but I was at least surprised and confused by how bad I felt.  It took me a good two hours to realize that I felt bad because I was sick.  That would have "sudden" if I'd been smart enough to notice it when I woke up instead of when I got to work.  I mean, it was awfully sudden.  One minute I was worn out from a busy four day weekend and the next minute my bones were trying to implode . . . .

But it seems a little Gradual when I look at my whole week.   I was extraordinarily tired Wednesday.  I thought, at the time, that I had good reason to be tired.  I had driven a several hours during the weekend, moved furniture on Monday, and did a little fencing practice Tuesday night. Of course I was tired!  But then, I'd also slept in Tuesday and took a nap that afternoon, so normally I would expect Wednesday to have been the kind of day where I joke about having sore biceps and go on with my day. But I was dragging around like . . . . like a person coming down with something.  So, maybe, after all, the "onset of symptoms" was gradual.  If you count Wednesday as the day the first symptom (fatigue) arrived, and this morning as the time when the next symptom (body aches) showed up, and noon today as when I decided I was dying . . . well, that could be construed as Gradual.

Striking the Sudden/Gradual question from the list, all the other answers are "flu."  So I have a flu.  This being June, it's probably just  -A- flu and not -THE- Flu, which is a good thing. I'll be home all day tomorrow if any good Samaratins want to drop by with chicken soup, Dvds, or medicinal booze. Especially the medicinal booze!

There was a live Mariachi band at the grocery store yesterday.

At first, I thought it was piped-in music, and said to myself, "This is nicer than the usual musak."  But I noticed it was getting louder as I moved closer and closer to the Butcher aisle.  Sure enough, there they were, standing between the cold-cuts and the chicken.  Playing some really great music.  But why were they there?

I had plenty of time to listen to them while I stood in front of the cheese display and tried to find affordable parmesan.  I had decided, ten years after copying the recipe out of Snorty Stompy's hand-written book of favorite recipes, that I should actually make some Lasagna ala SS.

It started with my mother.( Collapse )﻿
Collapse